The Atom and the Bomb

engines were available as diesel and glow versions 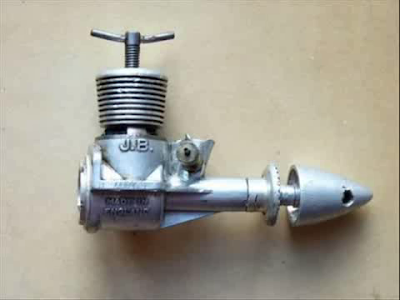 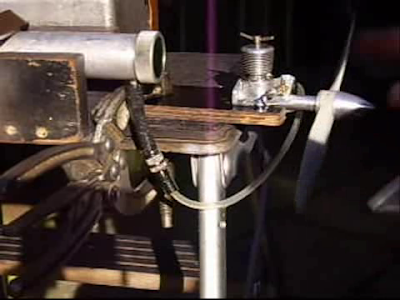 Design history:-
The Bomb was designed by charlie Cray and manufactured by John Ballard in England where John was a part of the ED organization. He departed that organization after a disagreement with the board of directors in 1957. He teamed up with Engine Designer Charlie Cray and opened the new J B manufacturing plant where they produced two lines of engines; the 1.5 cc Atom and it's little brother the 1.0 cc Bomb. Both engines were offered as either diesel or glow versions. In spite of a slick marketing campaign they were not that popular with the consumer. The engines had a metallurgical problem which caused them to have a short service life  and as well they were not that powerful.
Mainly for these reasons the J B engines received poor reviews from the modelling press and dropped out of sight. Today they are considered to be scarce and hard to find because, not many were were produced..


Specifications:-
Displacement 1.0 cc
Observations:-
This is Peter's story about his little J.B. Bomb that he got off eBay.
When making the insert of the new piston with the connecting rod, I used a hammer to close the rivet in the top of the piston...but I was not careful and the end of the connecting rod hit the iron plate that I was using as a working surface. The nut was turning by itself, and as a result, the big end of the rod was damaged.
while attempting  to correct the oval shape at the big end, the rod broke into 3 pieces. with the top piece still attached to the piston....and that was really frustrating.
After a night's sleep and thinking about the problem I decided to cut off the damaged big end, and make a replacement piece on my late using an end of a drill rod. I made the new rod end part slightly thicker than the original rod (2,5 mm).
I drilled out the end to fit over the stub of the broken upper rod end and put the two  parts together in telescope fashion.
I measured everything exactly and put the assembly together using silver solder...and hurrah...it held!....Thank god a happy ending, I hope ......after all of that work.
Let's see if she will start smelling like a diesel should.


Click the play button below to view a short video clip.
Special thanks to Peter (YouTube Channel Valic000) for the material shown in this page


View the complete story below.