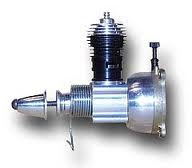 Cox model engines  were in production for more than 50 years between 1945 and 2006 by L.M. Cox Manufacturing Co. Inc. who later became "Cox Hobbies Inc." and then "Cox Products" before being sold to Estes Industries when it became Cox Models. On February 7, 2009 Estes Industries stopped producing Cox engines.
Millions of engines were produced and they became the most common 1/2A Class  0.049 cubic inch engine in the world and probably still are today. Although the production of the engines ceased some years ago now, engines made as far back as the 1950s are still sold "as new" and in abundance world wide.
Cox developed the Babe Bee 049 in 1956, it was designed by William (Bill) Selzer, and featured an extruded aluminum crankcase, not cast like all the others, this engine sold for just $3.95 and stamped the final nail in the coffin of many competitors whose engines were selling for substantially more. The Babe Bee was a high quality high precision engine which started easily and was very reliable, unlike some of the competition.

The 1956 Babe Bee 049 (Cat#350 - Manufactured Nov 1956-Jan 1996) is commonly referred to as the classic Babe Bee, it was the first engine Cox produced with an extruded machined anodized bar stock aluminum crankcase. This crankcase was machine made and was much cheaper and faster to make than the cast aluminum crankcase of the earlier models. This engine was also supplied in thousands of RTF (Ready to Fly) airplanes sold in department stores worldwide. It has an integrated 5cc fuel tank. Max output power was recorded around 0.057 bhp (42 watts) @ 13,500 rpm on 15% nitro.
Specifications:-

The early engines that were produced before 1957 had a light alloy piston rod which is retained in its socket by a slotted steel retaining cup which in turn is held in place by a steel circlip located in a shallow groove in the interior piston wall. This arrangement (known as a three piece piston) was abandoned as of 1957 in favour of a hardened steel rod which was swaged into a bearing cup formed integrally in the piston interior. The advantage of this latter set-up was that it simplified assembly and the bearing could be re-set to take up play using a suitable "reset" tool to re-swage the cup. The Bee engines had 2 types of crankshaft produced. and they are both interchangeable. 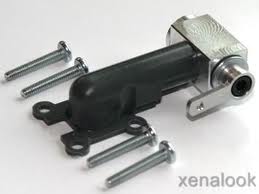 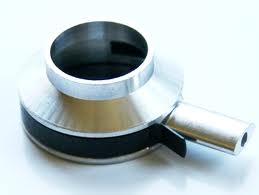 Click on the object below to see a short video clip of the RC modified version of the Sure Start version of the Baby Bee starting and running on low nitro fuel with a rich NV setting.

Do you have a video clip that you are willing to share; a vintage engine to trade or want to purchase one of our vintage runners?
If the answer is yes, go to our trading post for a visit and have a look around.
To go to the Trading Post site right click on this LINK it will open in a new window.