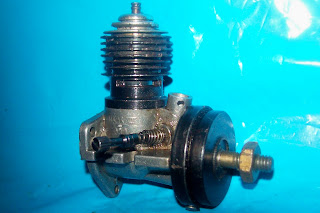 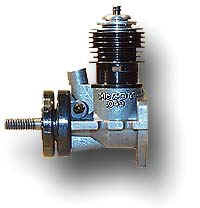 The Mk XIII Wen Mac 049 was designed and manufactured in The United States in the mid 1950's by Atwood. The same talented engine designer who created other great engines such as the Cox Tee Dee and Medallion series. The Mk III was introduced in 1959 and featured a wind-up recoil starter.

Observations:-
The engine was marketed under various brand names over the years including McCoy. It was almost exclusively produced for a line of ready to fly plastic control line model airplanes. The engine was produced to very high quality and machine tolerances.

Engines were picked at random, for a quality control check. Part of the quality check included running several engines for 8 hours a day for as long as 30 days. Piston tolerances were 15 millionths of inch for size, roundness and taper

The engine is now qualified for use in the old time 1/2A Nostalgia FF flying events consequently, the good ones are getting harder and harder to find.

The engine featured in the video clip is not mine, but I have owned a couple in the past; which were mounted as outboard engines on a Ju 52. During the early 1960's these engines were so numerous that American Hobby Center in New York City, was selling them for the fabulously low price of $5.95.

The glow heads were prone to burn out and replacements were always hard to find. People learned to pull  the steel contact out and drill and tap the old head for a 1/4 - 32 short glow plug which worked fine. These little engines will really turn up the revs when run on high nitro (to 30%), but you will see in the video clip that they do quite well on 5% fuel.

Click the object below for a demonstration video on starting and running the little Wen Mac.

Special thanks to EBay Seller Dadretread, and RC Network (Germany) for material shown in this page.