Published on 1 Jan 2014 ***First a happy new year ***..to all of you out there,who still hold on and like my little journeys in model engine land. Welcome for the first video of this year. I desire a long time a MK 2 Mills, as the mark 1 in my collection is a engine that I admire a lot, so very well made,with superb fits all over, no play after so many years. If you own a genuine Mills, you know, what I am speaking about..just amazing engines. Did you know that the Mills fuel needles were actually converted old gramophone needles?.. Mr. Hardinge worked too in a German gramophone company, I think in Berlin, where he got his hand on them for very little money ( before the WW 2). The MK 2 is usually made with a dark magnesium cast crankcase, so when I spotted this rare one, maybe from aluminium bar-sock, I was very happy to bid on it, but I was not alone bidding, so I hoped, some people will drop off (many thanks Paul!!)... as also the condition was not really "Mother's nicest " The biggest problem was the wrong timing due the short rod. After studding all the information in my books and at Model Engine News I found out that this engine was made up from 2 different types. An other problem was the intake trumpet and tank assembly. Its a cast part and I almost tried to make a casting, but decided to first give it a go in the old fashion way. And it was going well ,as you will see its not a exact copy of the tank assembly, but it will do for me. The exhaust stacks compensate for the less then perfect tank assembly.... a bit!).  I hope that you agree with the look, as its not all 100% original, but better then it was. Many thanks for following my hobby and I hope that you will enjoy this one too.

The original box of the famous Mills 0.75 cc 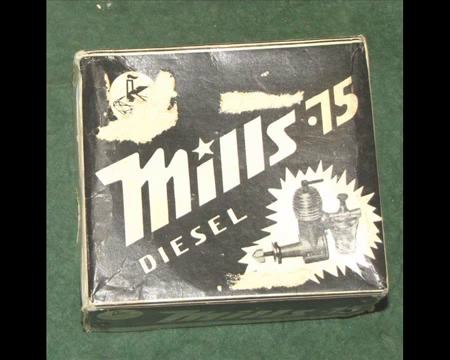 The company was founded by Arnold Louis Hardinge, his father was German and his mother British. He began manufacturing model trains and in 1946 he branched out into producing model engines. He was the holder of several patents which proved to be important to the success of his engines. Below is one of his patents from 20;05/1946 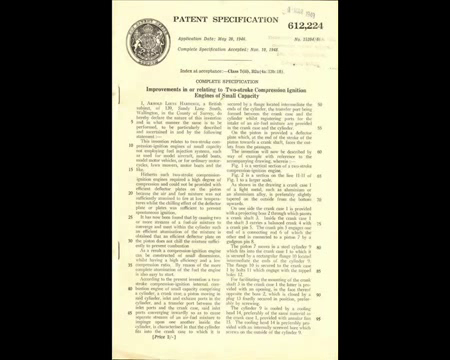 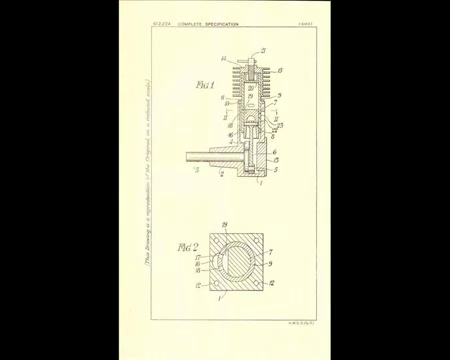 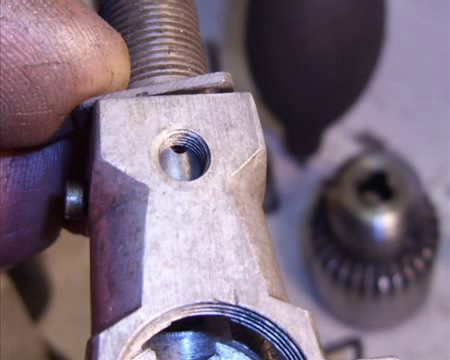 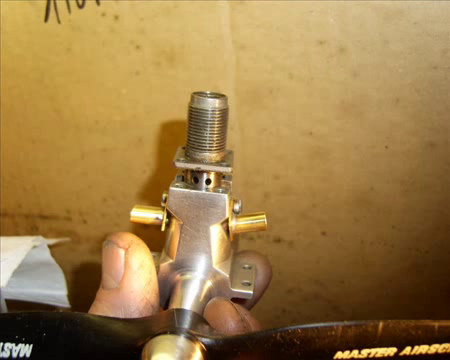 In the case of the 0.75 cc engine the atomizer holes are placed on the intake side. 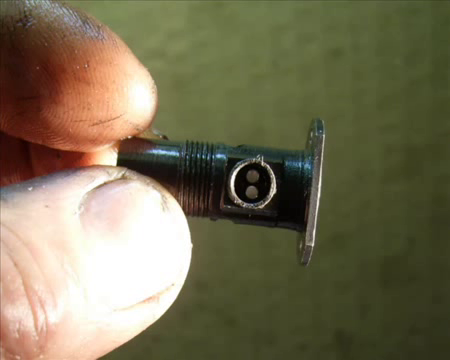 The idea was to force the fuel air mixture through tiny holes to aide the atomizing process and to promote combustion efficiency in the cylinder. Proof that the system works is demonstrated in the following pictures with the Mills system shown on the right. 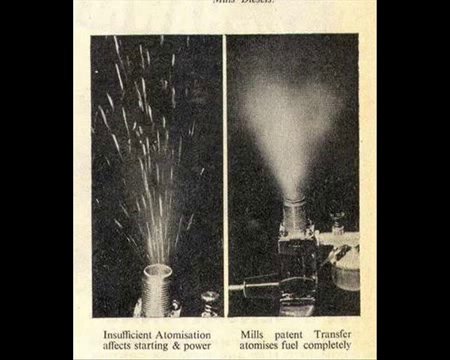 Period Ad testifying to the remarkable endurance to the Mills engines. 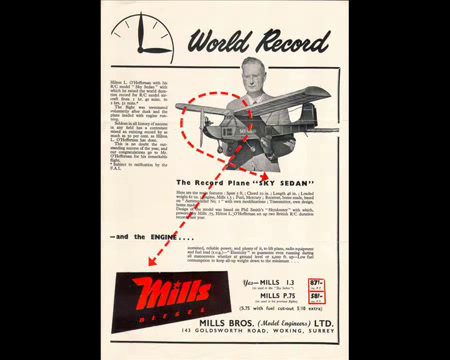 Mills pistons and liners are superbly made with a finish that is similar to those on the Cox engines, they are not lapped but are machined to the final size and finish, parts are hand selected to achieve a close tolerance fit.
Below we show my MK I 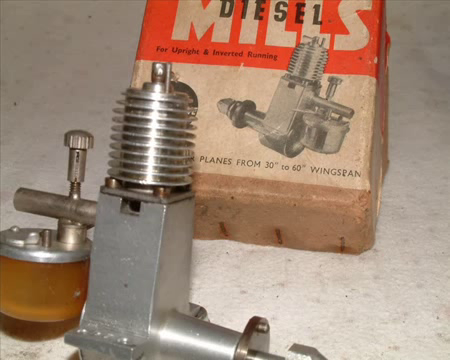 My engine was not very pretty when received and many parts were missing but as it is a particularly rare example of a rare model; the crankcase is machined from bar stock where the normal engines have a cast magnesium one. 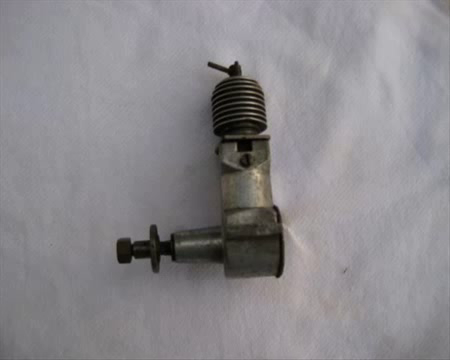 Magnesium cast case is shown below. 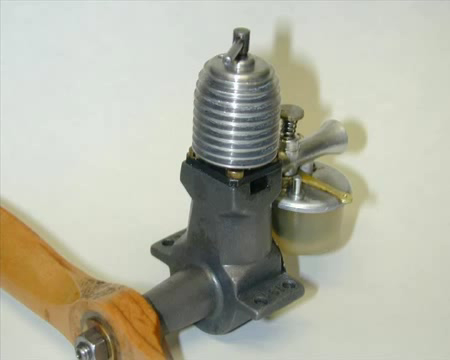 First we start by disassembling the engine and giving the parts a thorough cleaning. 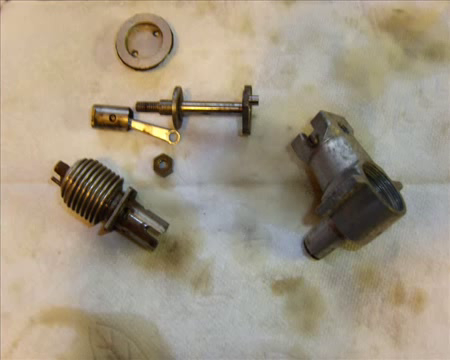 This is about the time that I discover that the piston, liner and connecting rod do not belong to my engine. 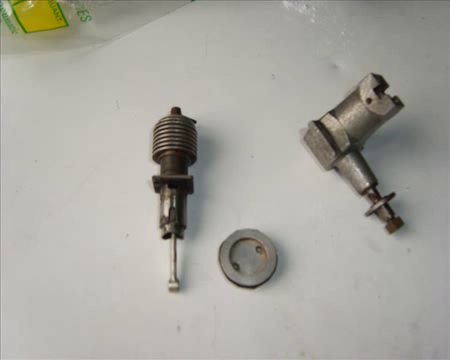 My research; mainly at "Modelenginenews.orgion" I discovered that in 1949 a modification to the porting was introduced which boosted the power output significantly (.08 to .10 hp).
An inspect of my engine revealed there was something wrong with the timing; at BDC the piston was too far down in the cylinder to achieve enough compression on the up stroke. The solution involved increasing the length of the connecting rod by a full 3 mm. 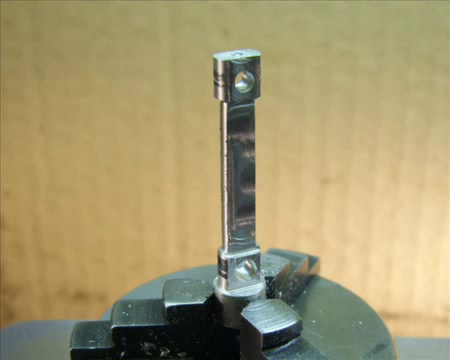 The finished new longer rod is shown  on the right. 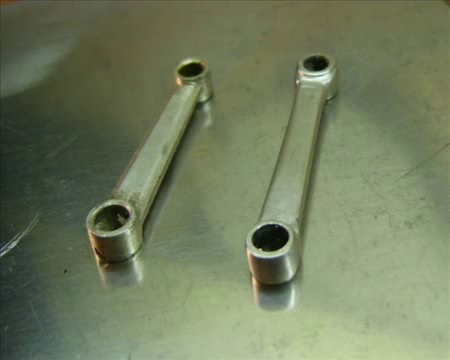 After installing the new longer rod at BDC the top of the piston is at the same level as the bottom of the exhaust port. 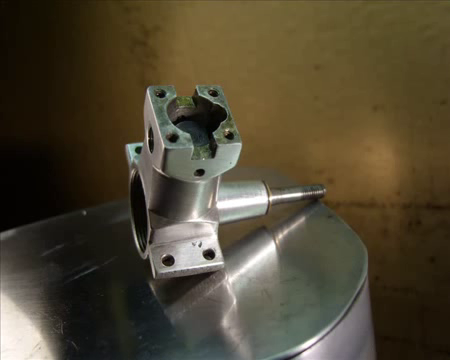 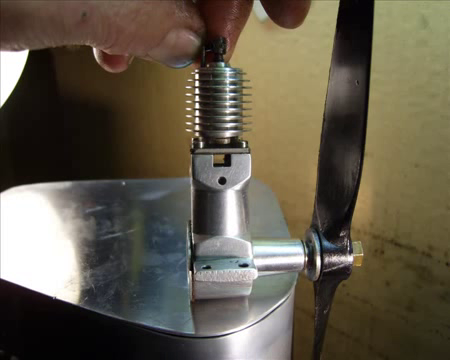 I checked a few pictures on the internet to get a better idea of what the fuel system should look like. 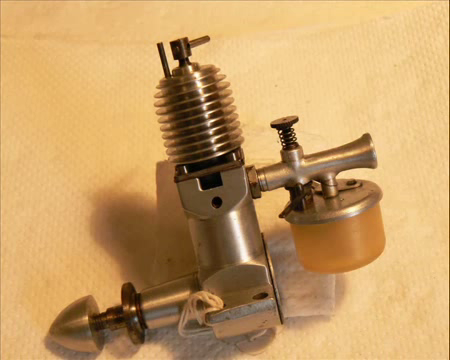 Below are the individual parts of the fuel metering system, some of them are very small like the spray bar....only 2 mm in diameter with an inside hole of only 1.6 mm. 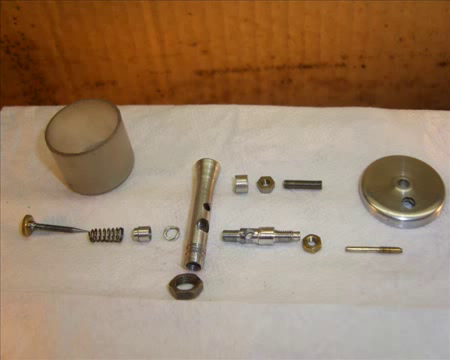 The components assembled shown below with the fuel tank fashioned from an old glue bottle. 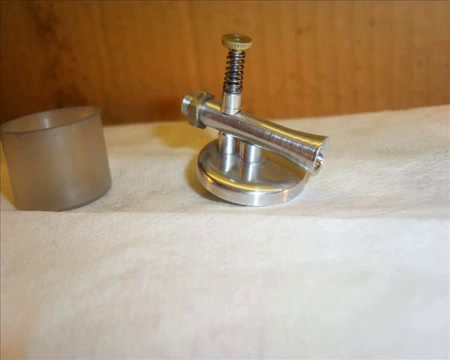 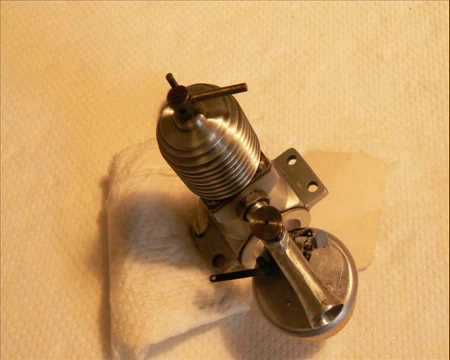 She is starting to look complete, but there is still something missing. Can you see what? Its the filler cap, of course. 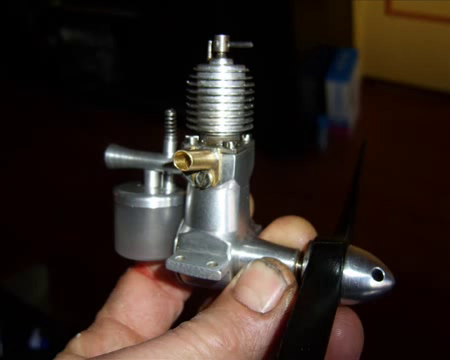 The engine has threads under the exhaust ports but is missing the exhaust stacks so I made some of brass, only I made them smaller than the original. 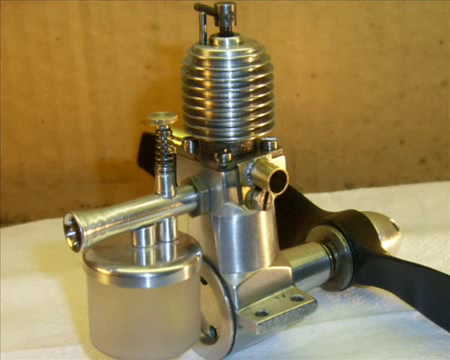 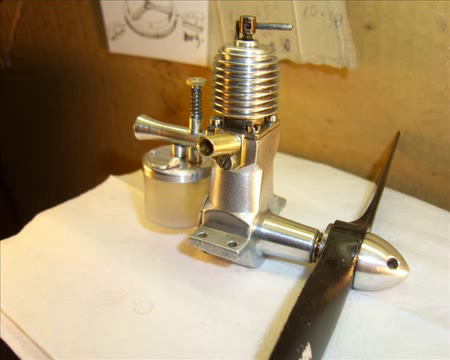 Below the engine is shown in the test stand ready for its first run. 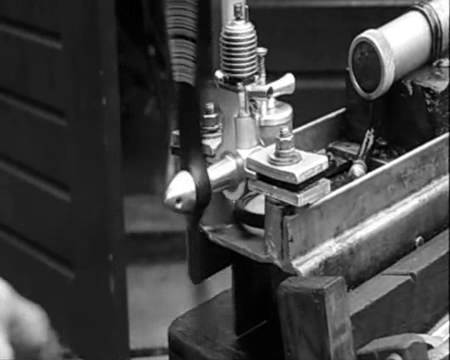 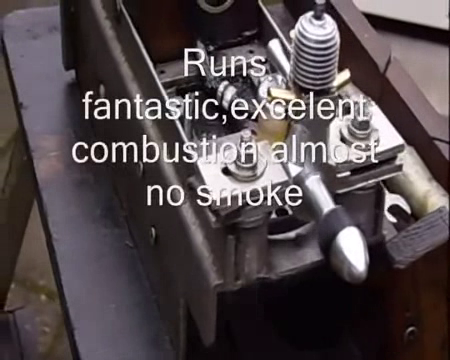 Watch the engine starting and running after a major refurbishment.