This bearing replacement was not the easy project I had envisaged. The years of float flying had taken its toll on the condition of this engine. There was a considerable amount of rust coating the surface of the steel components, such as the crank and cam shafts, making disassembly difficult to say the least. Removal of the propeller drive would have been near impossible without the application of heat from a pocket butane torch.
The valve rockers and push rods removal went without a hitch after removal of the single socket head screw, holding the assembly to the head. 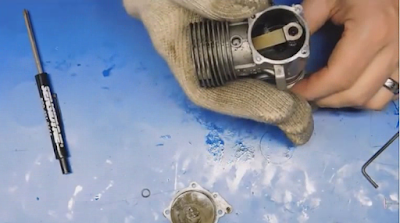 The hole in the crankcase that is specifically intended for the extraction of the wrist pin retainer, an essential step before the connecting rod and piston can be removed. In my case I used a dry wall screw to accomplish this extraction. 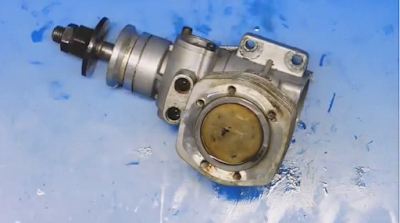 
The next step was to remove the cam shaft; sounds simple enough but after removing the cover it was found that the shaft would not move out. It took a lot of sweat and prying before we were convinced of what the real problem was; the timing gear was not clearing the cam follower, even though it was pushed back as far as it would go with the push rod guides in place.....so remove the head before removing the cam shaft.
The screws holding the head loosened one by one after much coaxing with the metric Allan key; taking particular care not to damage the hex slots or break the screws in torsion, which would seriously complicate the repair if that occurred.
With the removal of all screws the head lifted off after some prying with an Exact o knife, taking particular care as to not scratch or otherwise damage the face of the head mating with the top of the cylinder liner, since this is a metal to metal joint without any gasket to compensate for rough surface finishes.
The liner its self was separated from the crankcase, using the same wedging and prying action.
With the liner removed, the connecting rod big end could not be detached from the crank pin no matter what position of the pin was in.
It wasn't until I read the manual and watched a YouTube video several times did I realize that the wrist pin had to be aligned with the hole in the back of the crankcase and the wrist pin bushing gently pulled out with a dry wall screw, before enough clearance was established to wiggle the big end off the crank pin, so that the piston and connecting rod could be removed from the crankcase.
Once this was done it was a relatively simple matter to push back the crank shaft and remove it through the back side of the case.
With the application of more heat the big bearing was pushed back with a drift pin and removed from the back of the case and the forward bearing pushed out through the front.
The only other points worth mentioning is a reminder to remove the dust shields from the rear bearing and the back side of the forward bearing to facilitate better bearing lubrication.
Freezing the bearings and lubricating the case helps with the insertion of the new bearings, this part of the process went rather smoothly in this case.

Things did not always go as planned and the valve timing was a real bitch of a job due to multiple witness marks on the faces of the calm shaft gear. The marks were so small that they were almost invisible without magnification and because each side of the gear had marks, I put the gear in backwards on my first attempt at timing.